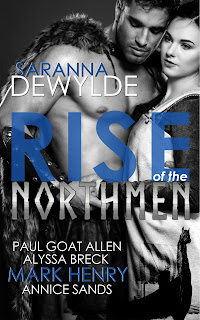 RISE OF THE NORTHMEN brings forth five stunning tales of sex, love, violence and triumph. From Vikings to Krakens to Berserkers to Valkyries, there is something for anyone who is a fan of Norse mythology and the mighty Northmen of days gone by.
This heart-stopping erotic anthology featuring Saranna DeWylde, Paul Goat Allen, Mark Henry, Annice Sands and me is available now!
To whet your appetite, here’s an excerpt from my novella, Mark of the Raven:
Kára stood outside Loki’s door with her hand poised in front of the bronze knocker ring. A bear made of metal was befitting someone who so often acted like an animal. A battle took place in her mind. Was virginity really so important? It was just a biological thing. If Loki would trade her Gram’s life for her virtue, would it not be worth the sacrifice?
The door opened and it startled her. Loki tilted his head to the side. “Change of heart, Kára?”
She leaned forward. “I need to speak with you.”
He stepped back and allowed her to enter. He was dressed casually in cotton pants and no shirt. She avoided staring at his broad chest. It was a curse that all the gods were so beautiful. He closed the door before crossing the room in bare feet.
A shiny gold pitcher of mead sat on the table before the fire. Loki poured some into a matching chalice and offered it to her.
Normally, she would decline but not that night. She took a sip of the amber colored liquid. The honeyed notes were obvious but it was stronger than what was served with their communal meals.
Loki poured another chalice for himself and leaned his butt against the table. The muscles in his abdomen flexed. “What can I do for you?”
“I have a proposition for you.” Kára looked away from his torso and up at the giant eye carved into the stone wall above the fireplace. There were things in Valhalla that she had never imagined in her mortal life. She had not seen such riches even after a successful plunder.
He laughed. “You are propositioning me? The moon is full and the gods must be crazy this night.”
Kára took a deep pull on the mead and cleared her throat. “I have remained a virgin here.”
“I know. Much to my displeasure.” Loki sipped from the chalice but kept his eyes on her.
“What if I were to offer my virtue to you?”
He raised an eyebrow and his mouth twitched. “You mentioned a proposition. What are you asking in return?”
“I would ask that a life be spared.”
He sat his chalice on the table and came to stand before her. “Please do not tell me you have fallen in love with a mortal. It is so cliché.”
“Not exactly. I have been in love with him from before, when I too was a mortal. But I have learned he has been chosen for the Hall of the Slain.”
“So that we are clear, you are asking that I spare him in exchange for your sexual acquiescence?”
She nodded and downed the rest of the mead. The sweet alcohol heated up her insides and gave her some much needed courage.
Loki took her by the hand and pulled her to the table. He set her chalice next to his and wrapped his hand around the back of her neck, snaking his fingers up into her hair.
It had been so long since someone had touched their lips to hers. His tongue was warm and tasted of the mead they’d just shared. She put her hands on his shoulders and stepped closer to him. He gripped her hair and slid his other hand up her rib cage until his thumb rested at the curve of the bottom of her breast. The slight stroke of that spot instantly hardened her nipples. As much as she didn’t want to be turned on by him, she was.
He deepened the kiss and sucked her tongue. With two steps he backed her up against the table and picked her up to sit on the edge. Using the width of his hips, he forced her legs apart and stood between them.
The heat of his body penetrated her skirt and warmed her inner thighs. He eased her onto her back and coaxed her legs up around his hips.
So this is how it will be, she thought. My virtue surrendered atop a wooden table to the god of chaos, no less. His erection pressed hot and hard against her. She closed her eyes.
His hand slipped under her skirt and slowly inched up the outside of her thigh until he gripped her naked hip.
“Mmm. By the light of the gods you are beautiful.” He gently swept his lips over her cheek.

To read more, pick up your copy today!